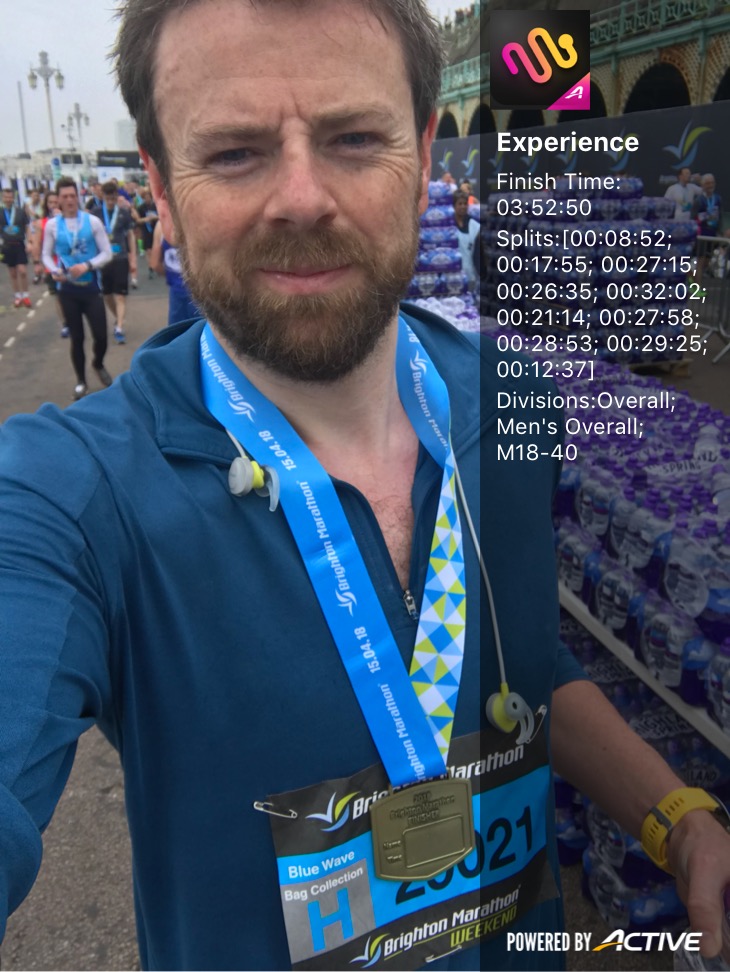 Due to the foot injuries I have experienced, I went into the Brighton Weekend annoyed rather than nervous. I had decided a few weeks ago that I would make it to the start line, as I had paid my entry fee, and just do what I could. It would be a training run. If that meant the training run was 2 miles, or 5 miles, or 12 miles so be it. It would be whatever my body would allow. But under no circumstances would I be doing the marathon. It would be another marathon I have to drop out of due to injury….

We headed to Brighton on Saturday morning, after I woke early to throw in an easy 26 mile bike ride, and arrived and checked into the Brighton Vegetarian Bed & Breakfast about 11.00am. Great friendly B&B with an awesome selection for breakfast.

We walked to the event village so I could collect my race pack and the free event t-shirt (not the best fitting t-shirt I own, and doesn’t even say finisher.) I had to select my predicted finish time, which was a bit hard as I planned on stopping within the first half marathon distance. Anyway, I chose 3:30 to 4:00 hrs – optimistic as ever 😀. I decided to have a last minute massage to ease my very tight quads – the masseur agreed with me on the tight quads – which was worth every penny of the £20.

We enjoyed a Burrito from the food stall and then mooched through the Lanes before making our way back to the B&B. After a quick meal in the local pub it was time to rest up and get myself ready for the run. Thankfully the event had a reasonably late start time of 9:45am, however, I still needed an early breakfast as I can’t run after eating straight away, so needed the digestion time.

Thanks to my optimistic finish time option I was in the Blue wave, which was the second wave off. We got going about 7 minutes after the first runner crossed the start line. This was not before I had the usual 5 nervous toilet visits 🙂 And I was only just saying I had no nerves…… 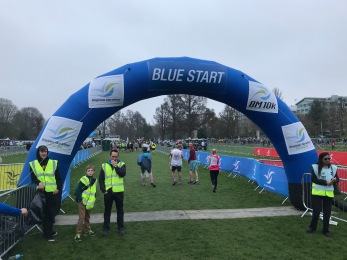 Face of the unknown. Jim is not impressed…

As soon as we crossed the start line they had us climbing as we ran around Preston Park – apart from a climb between mile 3 and 4, and the slight climb around mile 8 the rest of the course was fairly flat, so although they were harsh and hit us with a climb early on, they made up for it with the rest of the course being a friendly flat affair.

After the climb we headed down towards the coast line, before coming back on ourselves slightly and then turning once again to the coast. We hit the coast line on mile 5 and it spat us out right by the famous Brighton Pier. We turned left and headed east along the coastal headland. At this point I was on about 8:35min miles and feeling comfortable – my HR sitting nicely around 140bpm mark. I was constantly assessing how my foot was feeling, and at this point it was pain free. I was starting to once again feel the need for a nature break and at mile 7 the portaloos came into view at just the right time – no Paula Radcliffe moment for me today 🙂 .
Just after mile 9 they had us turning back on ourselves coming back along the same road they sent us out on. Thankfully this was now slightly downhill, but into a slight headwind! This was a drag, but I was keeping the pace comfortably at 8:35min miles. Pretty much where I was at when I did the MK 20 Miler just over a month ago. 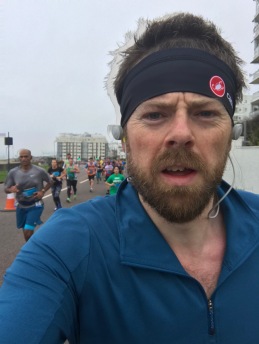 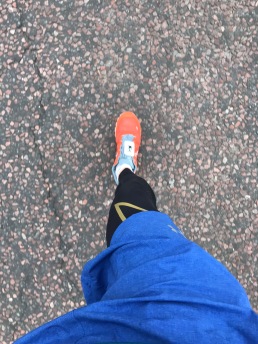 As I came back towards the Pier I heard my name being screamed out loud – even through the heavy metal I had playing via my headphones (I didn’t have it that loud) – Tania was stood on the sidelines cheering me on. She had missed me at mile 3, 4 and 5 as I was just too quick apparently 🙂 . Soon after I passed under the half marathon banner. It was at this point that the pain in my foot started. I had 2 options. Stick with it and see if it passed or stopped as planned and call it a day. As I was already running away from the centre I decided to stick with it for another 10 minutes before calling it a day. However, the pain thankfully passed after about a mile so I continued to run.

At mile 17 the foot pain was no longer a problem, it was the pain in the quads and the calves that were now the main concern. They were exploding. Every part of my body was telling me to stop – come on just quit – you’ve done well, you don’t need to do anymore – remember you were not planning on running the marathon – you’ve done nearly 18 miles, that’s pretty good.

Instead of quitting I consciously slowed the pace down a bit. I knew I had to do roughly 9:00min miles to break the 4 hour mark, and I had time in the bank thanks to maintaining the average pace of 8:35min miles up until this point.

I got to mile 20 and I was still running. I had also now passed the point of my previous longest run (MK Festival of Running). At this point my mind was just begging me to stop. This was the first point of the race where it was very noticeable that the run was taking its toll on everyones body, as there were more and more people walking and stretching on the side of the route. When I hit mile 21 I stopped and started walking. The mind had won……. but only for 15 seconds. I soon realised that the pain was the same whether I was walking or running. So why walk when I can run. I say running, by now it was more of a shuffle as the legs wouldn’t allow me to run how I normally run. The technique was out the window. This was now a fight, a fight to the finish.

Soon after the 21 mile mark we were turned around and sent back along the coast towards the finish line, just past the Pier. The wind was now on our backs, but it made little difference.

Mile 23 and only 3.2 miles to go. At this point you look up and can see the British Airways i360 tower and Pier in the distance. They look further away than 3.2miles!! The more I plod the closer they are getting – that is without a doubt – but it didn’t look like it and didn’t feel like it. I said to myself I only had 30 minutes of effort left to do. Only 30 minutes. That’s not much. Keep going.

When I finally reach the i360 tower I have less than a mile to do. I am nearly there. I can smell the finish line. I try to pick the pace up but after a few seconds I decided that was a bad idea, and so did the legs. I drop down past the Pier and I can see the finish line. Once again I hear a familiar voice shout my name as Tania is on the left hand side of the finishing straight cheering me on to the end.

As I look up I see the main clock counting up towards the 4 hour mark. Now I know this is not my official time, as that wouldn’t have started until I crossed the start line, but a part of me said you have to get under that arch before the clock reached 4 hours. So I sprinted – I say sprinted., it was more like a 8:30min mile pace, but after plodding along for so long it felt much quicker. And with that I crossed the line with the clock 8 secs off hitting the 4 hour mark.

I HAD DONE IT. I HAD JUST RAN A MARATHON. Me, the guy who used to walk round the 400metres track at school because running got me out of breath, had just ran 26.2 miles! And not only that, I had crossed the finish line in a very respectable 3:52:50. A sub 4 hour marathon.

I have not been able to train due to injuries. Probably for the last 8 weeks in total. A few runs here and there and then the 20miler 5 weeks ago, doesn’t really add up to much training for a marathon. So to say I am happy with myself is an understatement. I have to ask myself what I could do if I could train properly…… That answer will have to wait for another day.

As I sit here typing this (I know it is late, sorry fans 😂) I am once again nursing the foot injury. Unfortunately, despite the pain not really being felt throughout the run, it is now back with a vengeance. I am confident that it will subside within the next few days and if I stick to biking and swimming, I think I will be ready to start running again in a few weeks. Still plenty of time to keep the training going ready for Roth.

In the mean time I am going to sit here with a grin on my face, gloating in the fact I have just ran my first ever Marathon. A Marathon that even come Sunday morning I had said to myself I could not do. This shows me that the mind is a powerful tool, and will allow you to overcome any obstacles than stand in your way. You just have to believe.

Just before I go I have to leave with you a quick review on the actual event itself. Brighton Marathon was a well organised and great event. From start to finish. The route is friendly and not too challenging. The water stops were a plenty, with multiple gel stops scattered throughout. And what can I say about the support…….. it was phenomenal. Along the whole 26.2 miles there were spectators lining the route cheering you on and giving encouragement. Plenty of them handing out bananas, oranges and sweets to help keep the runners fuelled. Just thinking about the support and the noise they were making is giving me goosebumps. They really did help me to the finish. Thank you every single one of you.

Oh, and one last thing to leave you with……….. I RAN A MARATHON. I BLOODY WELL DID IT 🙂 This is a big step to Roth, and one I am happy I took.

If I don’t get in the London Marathon in 2019 then I will see you again next year Brighton. This time with a little more training in the legs.

2 Replies to “Brighton Marathon Weekend – My first ever Marathon.”