My first swim over 3000 metres – it was actually only 25 metres over at 3025 metres to be exact, but it was over non the less 🙂 . That leaves me with only 775 metres to go to hit the distance for the long course Triathlon. Piece of cake, piece of cake…. GULP!
Although I hit the great distance it did involve most of it swam with my lovely toys. Only about 600 metre was swam without. I really need to start to leave the toys in their bag. Here’s hoping the wet suit will help 🙂 .
Later in the week I did a shorter 1250 metre swim with about 1000 metres of which were toy free. It was such a fight, and I felt like I was fighting the water the whole time. I have to put some of that down to fatigue after the 3025 metre swim. Looking forward to pushing on for the 3500 metre swim this coming week. Where I hope to be able to increase the distance I do without the toys, no matter how hard it is and no matter how many “breathers” I have to take.

My first cycle commute of the year – and it turned into a cold wet affair! I originally took my bike into work with me on the Wednesday with the view to cycle home Wednesday and back in Thursday morning.
However……… Wednesday evening, just before leaving work, the heavens opened and hit us with some big hailstones and some torrential rain fall! Needless to say I left the bike at work and jumped back in the car for the drive home. So the plan was changed and the commute home was moved to Thursday night with the commute back in Friday morning. I like to do the commute this way round as I have no choice but to get up the following morning and jump on the bike no matter what the weather, or how tired I am.
The commute home Thursday evening was awesome. The legs were starting to feel alive again, and the conditions were pretty decent which led me to adding extra mileage on and taking the usual 18 mile commute up to 35 miles. The next morning was not so awesome! As I said I have no choice but to get out of bed and cycle in, no matter what the weather. And this was one of those mornings where I wish I had the car. By the time I got to work I was soaked. The rain started about 3 minutes into my ride and never eased, with it just getting heavier throughout. Cheers British weather…. cheers!

My first 100 mile bike ride of the year – ended up being 118.7 miles in fact.
The 100 mile Cambridgeshire loop with the Brixworth Velo had been planned for a couple of months, but someone had forgotten to plan the weather.
I left home at 6.00am for my cycle over to Brixworth to meet the other 100 mile adventurers – Ego (for a brief appearance), Captain, Clem, Pep, Chopper, Andy, Ade, and Woody. The forecast was cloudy. The forecast was wrong. We headed east with St Ives being the most easterly point of the ride and also being the only stop planned. By the time we got there we were all looking like drowned rats. Woody and Chopper had decided to either not look at the temperature forecast or to just blatantly ignore it. Woody was “summered” up, even having finger-less gloves and no over shoes. Chopper, opting for the summer gloves. At St Ives, Chopper was a broken man who couldn’t feel his fingers and was cold to the bones. Woody headed straight into Poundland to invest in a pair of gloves for him and Chopper along with some socks for himself (£2.50 for socks in a pound shop!!). 2 pairs of socks on and the final pair being used as overshoes – genius idea 🙂 The gloves were the best bit – he had only opted for some marigolds for them both 🙂 It may have been comical, but it sure was effective.
The stop at St Ives has to be one of the best stops we have had. Tom’s Cakes in St Ives is a must for any cyclist or non cyclist visiting the area. The selection of cakes is phenomenal and only beaten by how good they actually taste. On top of that they really could not have been any more accommodating of 8 very wet and cold cyclists. Not only supplying us with delicious cakes and great coffee, they also warmed up our gloves on their hot plates. Fantastic. I will be back soon, and I am certain we will be heading your way as a cycling group again in the not to distant future.
Leaving Tom’s Cakes behind we started to make our way home, not before Clem had a puncture – which took longer than normal to repair due to the resident mechanic, Chopper, not having feeling in his fingers!!
Great banter was had throughout, with my cheeks hurting as much as my butt cheeks on this occasion 🙂 . The weather may have been grim, but the ride and the company was not.
I left the crew at Sywell to make my way home and to complete the first of many 100 mile bike rides of 2018. 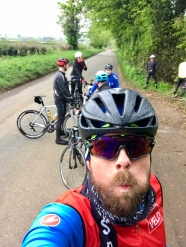 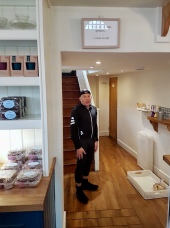 My first 20 metre run – well it may not be my first ever 20 metre run as I am sure I did shorter in school. However, it turned into such a short run as I wanted to hit the tarmac Wednesday night to see if my foot was up to running. 20 metres in and you guessed it…. it was not ready. I could feel something wasn’t right still – not painful, just uncomfortable. So I quit before making it worse. Another week of no running for me.

Overall a decent week of cycling under my belt with close to 200 miles ridden. And the swimming is improving, though I won’t be taking on Peaty any time soon…….