The weekend had arrived…. the weekend I have been secretly dreading for the last few weeks. Ard Rock Enduro.

The reason for me dreading it? Well since I had a crash at Bike Park Wales back in December, when I broke a bone in my thumb, I had not ridden my full suss mountain bike in anger since. And now I was heading to one of the gnarliest Enduro events in the UK.

I had taken part in the Sprint and Sport parts of this event last year, so I knew what to expect. And when I entered the full on Enduro race for this year, I entered it in the view of trying to improve my skills and in turn improve my times and standings considerably on last year. However, my mind-set had changed considerably when you consider all I have done for the past 7 months was ride on road bikes. So now the goal was to survive!!

Tania and I, along with our gorgeous Labrador Sally, arrived early evening on Thursday and met up with Russ and Sarah and their 2 dogs, Pippa and Herbie. Within the hour the tent was up and our pitch was ready to be lived in for the next 3 days. BBQ on and after having a meat fest it was time to get to bed.

Friday morning we woke early thanks to the early sunrise and the fact tents don’t shade any light and become saunas in no time!! Today was practice day for Russ and I, so we got kitted up and headed up to the vast expo area to register. This was not before I had dropped my bike into the guys and gals at the SRAM tent to have my fork and shock serviced – a much overdue bit of TLC.

Bike TLC completed and Russ and I head off for the practice session. The girls had already took the dogs up into the hills ready to meet us at the bottom of stage 2.
We headed out of the pits and straight away we are climbing, climbing, climbing. After 30mins we had reached stage 1 and nerves. Right now I was feeling the apprehension that comes with throwing yourself down a rocky steep mountainside when you have not been practising and dialling in the skills required to do this. I was now overly reliant on muscle memory and sheer determination. 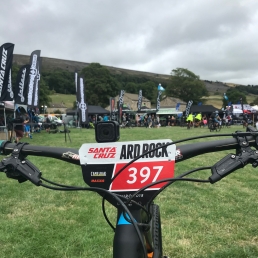 As soon as I set off I was smiling and loving it. That feeling of being on the edge but in control is exhilarating. Pushing the machine beyond what your mind is telling you it is capable of doing, yet it could take much more than I could ever throw at it.
I must admit that my Canyon Strive is a better bike than I am rider. It is a bike that allows me to get away with many twitchy mistakes and all I really have to do is point this steed in the direction I want to go and hold on for dear life!! 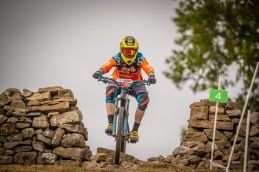 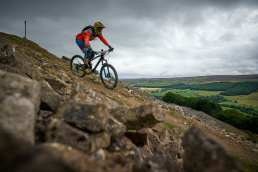 At the bottom of stage 1 I was buzzing. I had missed out the drop as I felt that was too soon to hit, but I had just survived and I had got my confidence back – but that was soon to be shattered!!
We climbed to stage 2 – this time a push the bike affair for the main part – and wasted no time in hitting the descent. Stage 2 and I have a history. Last year this stage got the better of me mentally when the steep switchbacks got into my mind and became the little devil telling me to get off the bike otherwise you will hurt yourself. I was determined that this year would be different, but alas it was not to be. The very same 2 switchbacks got me again!! As this was practice I should have just walked back up the trail and go again, but for some reason I didn’t and I just ended up pushing over the 2 little sections that beat me and got back on the bike each time. The rest of the stage is awesome, and to be fair the whole stage is awesome, but for some bizarre reason it has the beating of me. Oh well….. race day tomorrow, and then I will conquer the fear…….
We met the wife’s at the bottom where we were greeted warmly. A few minutes of boring them about our antics and we were on our way back to the first climb so we could go and hit stage 7. 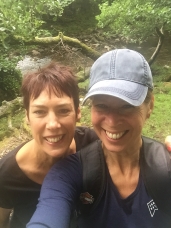 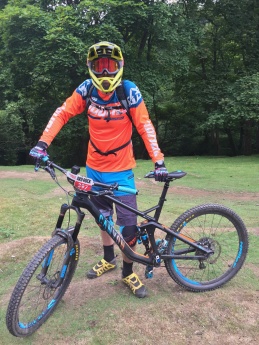 On practice day they open up only 4 stages – Stage 1, 2, 6 and 7. We decided to keep our legs fresh and only hit 3 of the 4 practice stages – skipping on stage 6.
Stage 7 is different from Stage 1 and 2. Both the first stages are littered with technical sections whereas Stage 7 is a much more fast flowing affair, with a new addition of a jump this year (you could roll it if you wanted). We flew down the stage, which helped give me some confidence back, and met the crew back at the pits.
Practice was done and dusted and the rain had held off despite threatening to throw it down all day.
We made the most of the afternoon by mooching round the expo, chilling in front of the stage listening to the live music on offer, and consuming both food and drink that was available to purchase. An early night was had ready for the big day tomorrow. 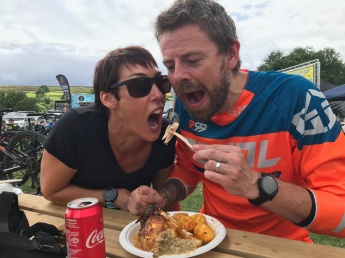 Race day:
My alarm went off at 7.00. Our start time was not until 9.00am so we had no rush. I checked the bike over to make sure everything was in working order prior to punishing it on the North Yorkshire Moors. Had my breakfast from a bottle and the much-needed coffee. I armoured myself up and was ready to depart.

And with that we were done. We had once again completed and survived the Ard Rock. This time it was not for fun and we were competing. I say competing, by that I mean I was timed against others, but let’s be fair I had absolutely no chance of competing. There are some seriously skilled riders at this event along with 3 previous world champs in Steve Peat, Danny Hart and Tracy Moseley. It is not every day you can say you competed and raced against World Champs on the same dirt. This is what I love about this sport. Everyone is inclusive. They raced, they chilled and the drank with the rest of us. These are legends of our sport and yet they are down to earth and just love what they do.

The whole journey took us about 5.30 hours, with the timed downhill sections taking me 28:37.23 minutes. The sun had broken through early morning and stayed with us for most of the day. Making the climbs very difficult in the heat and humidity – but give me this over rain any day of the week.

Back at base we ate and chilled in the summer sun listening to the bands on the stage and reminiscing about that turn and that drop over and over. Just after 7.00pm the organisers did the results presentation where Steve Peat won the Male Vets, Tracy Moseley the Females Masters and both taking home the overall for both Male and Female – Peaty piping Danny Hart (who won the Senior Males) by a mere 4 seconds to take the overall accolade. During the results they also had the freebie throwouts which get the crowd into a hungry frenzy for “free stuff”, with me successfully walking away with an event t-shirt 🙂
Steve Peat even served pints for an hour during the happy hour section – glad I don’t drink as the queue was horrendous at this point!
Then it was time for the UK Foo Fighters to hit the stage and cover as many songs as they could fit into their set. The crowd got going and it was an awesome atmosphere. With an end being called at 11.00pm.

So where did I finish? Well a lowly 330th out of 406 finishers (436 overall, but 30 DNF’s) in my age group. Not great, but I will take that considering the training I didn’t do – and in no small part to stage 2 as I lost about 1min 20secs thanks to my weak effort!. Overall I finished 757th out of 967 finishers.
So what does that mean – well I will be back next year…… if I can get a place, this event sold out in 2 minutes this year.

If you are into your mountain biking and love the thrill of pushing your bike, body and mind to the limit then you can do worse things than attend Ard Rock Enduro. The event is amazing, the people are amazing, the festival is amazing and most importantly the trails are out of this world. This is truly a wonderful event. From the organisation to the trails it was all exceptional. The festival is worth the journey alone, and it is super family friendly. The amount of families, kids and dogs at the event is amazing. It makes you smile when you see so many children enjoying riding their bikes. It also makes me jealous when I see how well they can ride their bikes – 5 year olds with more skills than me!!!

See you next year Ard Rock, where I promise to compete and to “complete” stage 2 🙂
Oh and please guarantee the same weather if you will…….

Some photo credits to Russ 🙂 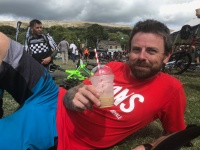 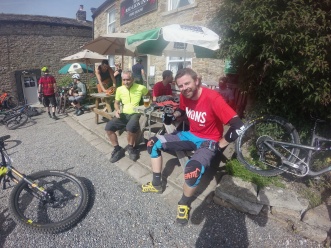 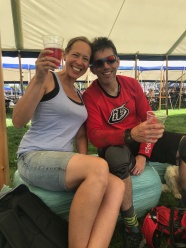 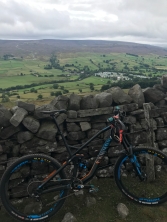